Back in “the old days”, most coaches became head coaches only after learning from mentors. They often started by coaching modified or junior varsity teams and eventually had enough experience to be hired as the head of a program. When coaches “grew up” in the same program, the team benefited from the consistency of teaching the “way we do things” and most often the team, over years, was successful. In Irondequoit, for example, there were only three coaches in the first forty-eight years, as Vern Babcock passed the team to Ernie Lisi and he passed the team to John Pratt, who worked almost a dozen years within the program before he became the head.

There are many examples over the years, but in the last thirty years it is easy to bring a few to mind. 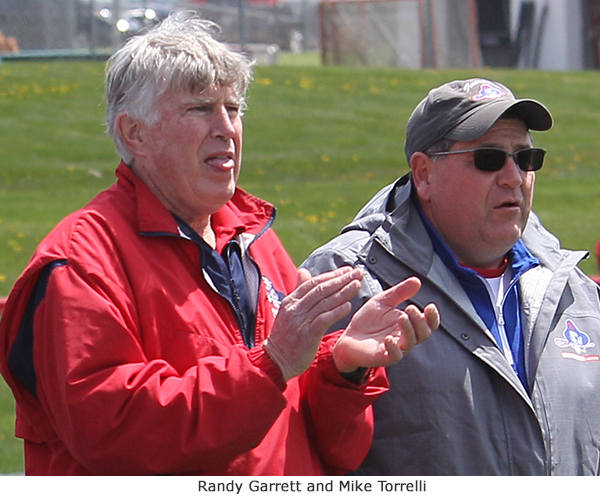 Jim Slusarski started the Fairport team in 1969 and Randy Garrett moved into the head spot in 1980 after four years in Webster. Randy held the position through 2003 when Mike Torrelli took the reins.

In his twenty-eight years Coach Garrett’s teams had 371 wins, a dozen Monroe County titles, five Section V Championships and four NYS final-four appearances. He was, for many years the Monroe County League Chairman. In the off-season he worked many lacrosse camps and helped to develop clinics for coaches. He coached seven USA Lacrosse All Americans and four All Academics while at Fairport. In 2003 he was inducted into the USA Lacrosse Rochester Chapter Hall of Fame.

After leaving the Fairport program, Randy worked for John Johnson at St. John Fisher College and eventually found himself back on the Fairport sidelines helping the lacrosse program as a volunteer.

Mike Torrelli served as Randy’s assistant for fifteen years before taking over in 2004.  The Webster Thomas and Ithaca College graduate earned his 200th win in 2018 and at the end of 2021 had a record of 230-88. His teams have won five Section V Championships, made the NYS final-four four times and the championships round twice. He has, thus far, coached eleven USA Lacrosse All-Americans and five All Academics.

In the 42 years between the two coaches, the Red Raiders have won over five hundred games.

John Johnson returned to his alma mater from St. Bonaventure to eventually become the head coach for the Braves in 1980. He held the position for twenty-six years until he passed the job to his long-time assistant, Ed Mulheron in 2006. 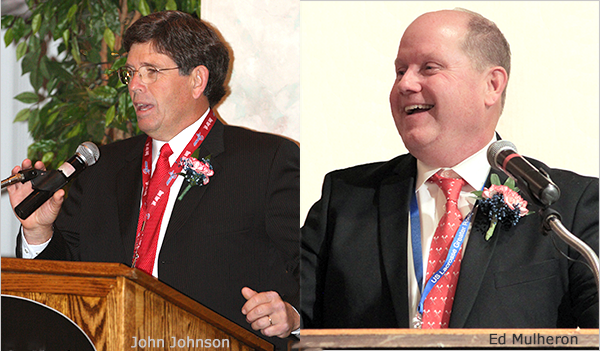 In his twenty-six years as the head coach, John had a record of 357-149. His teams won thirteen Finger Lakes Championships, six Section V championships and made the NYS semifinals four times. He coached ten USA Lacrosse All-Americans and four All Academics.

John was the Finger Lakes Chairman for thirteen years and was their Coach of the Year seven times. He is a member of the Canandaigua Hall of Fame (2006), the USA Lacrosse Rochester Chapter Hall of Fame (2008) and the NYSPHSAA Hall of fame (2017).

After his retirement, Coach Johnson went on to have a very successful tenure at St John Fisher College where he was the head coach for twelve years.

In 2006, John turned the program over to his long-time assistant, Ed Mulheron, a 1978 CA graduate who returned to Canandaigua a while after graduation from Nazareth. He posted a 160-60 record during his eleven years as the head coach. Coach Mulheron coached four USA Lacrosse All-Americans and five All Academics.

When Ed retired, the passed the baton to another CA graduate, Deven York, who had spent over twenty years with the modified and junior varsity  CA programs. In his brief tenure at the end of 2021 he has a record of 53-21.

In the 42 years, between the three coaches, the Braves have won over five hundred games.

Harry Queener was the fourth head coach for the Mustangs, beginning his eighteen years at the helm in 1986. By the time he passed the leadership to his former player and then long-time assistant, Brian Hobart, he had a record of 289-71. 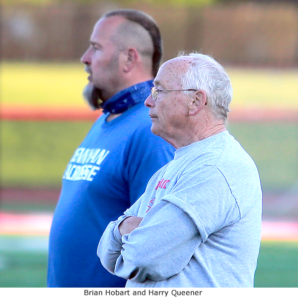 In his second year as head coach, after winning the sectional championship Harry told John Moriello at the D&C, “These were the first kids to play intramurals in seventh and eighth grades. It’s finally paid off. Penn Yan hasn’t exactly been a lacrosse town”, a statement that he certainly changed over his tenure.

Harry coached a dozen USA Lacrosse All-Americans and one All Academic and was inducted into the USA Lacrosse Rochester Chapter Hall of Fame in 2004.

After turning the program over to Brian Hobart, Harry assisted his wife Patty as she started the Penn Yan lacrosse program for girls. He later returned to the boys’ team as an assistant to Hobart where he remains today.

Brian Hobart became the head coach in 2004 and like Coach Queener, has never had a losing season. His record through the 2021 season is 270-90. His teams have won sixteen Section V championships, thirteen Western Region Championships and four Upstate Championships.

In the 36 years, between the two coaches, the Mustangs have won over five hundred games.