A Strong History at Rush-Henrietta

In the “modern period” there have been a just a few programs that were constantly at the top of the local lacrosse world and one of them was Rush-Henrietta. 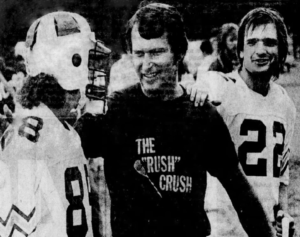 In 1969 there were about a dozen teams playing in the area. Fairport was new and the team played a few Varsity games that year.  Dave Armstrong (HOF ‘05) and Jim Cox (HOF ’97) created the Rush-Henrietta program that started out playing a light schedule that included the Irondequoit junior varsity team which took a 7-2 win that May.

The next year, Dave was the solo coach and with a full schedule led the Comets to a 13-4 record that included wins against Fairport, Eastridge, three city schools and a 4-4 tie with Webster. Junior attackman Rick Calver and senior midfielder Tom Ryan were first team all-league team members in that first year of Monroe County sponsorship.

Mike Welch took over from Armstrong in 1974 for a three year stint as head coach. Mike left town and eventually ended up as the long-time football coach at Ithaca College.

Rush-Henrietta had two high schools in 1979 and Dick Young kept the Sperry “Comets” team and Jim started with a junior varsity “Royals” team at Roth. In his fourth year at Sperry, Dick’s 1982 team went 19-2 and won a Section V title with players like face off expert Tom Rosa and attackman Tim Cronin. The next year (1983) Jim’s R-H Roth team went 18-3 and won their own Section V title with players that included Gordie Mapes and Bill Coons. 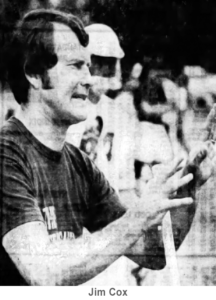 In 1986 R-H went back to one high school and Athletic Director Paul McKee quickly decided that Jim and Dick would co-coach the “Royal Comets” team. They worked together until Dick retired from coaching in 1993. Jim coached three more years, passing the baton in 1997, to former Sperry player Jack Beaney (class of 1982).

“I had a real good group coming back as seniors and I wanted Jack to get off on the right foot,” said Jim. Jim did return, however, for one brief moment. Jack’s father had passed away in his first year as head coach and he was at the funeral. Jim received a call from Rick Pound who was Jack’s assistant.  “He called me and said I need help. We’re playing Irondequoit. Will you come with me? I did and we beat them with those kids.” Eric Goodberlet, who scored five goals in the game, scored the winning goal in the 8-7 overtime win. Al Terilli added 1g-3a and Shawn Nadelen was demonstrative in the midfield.

For over twenty consecutive years there have been Jim Cox and/or Dick Young leading a lacrosse program at Rush-Henrietta and for seven years they worked together on the same field. Dick Young says, “Jimmy and I worked so well together. We were like brothers. We are still in touch all the time.” 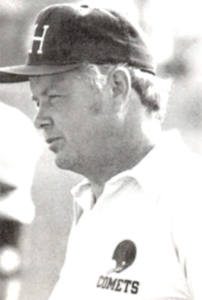 Jim Cox started coaching in Rush-Henrietta in 1975. Over his thirty-three years he coached football, basketball, and lacrosse. His teams won three Section V championships in basketball and two in lacrosse.

As a player, Jim was a football quarterback, in basketball, a shooting guard, and a pitcher in baseball, all “high profile” positions and ones that demonstrated, even at a young age, a desire and ability to lead. He knew what his players were thinking. “I always felt that I had the ability to relate to kids and really find the button to touch each kid. That was always my goal.”

Jim retired from teaching in 2001. He is a member of both the Rochester Chapter Lacrosse Hall of Fame and the Section V Basketball Hall of Fame.

Dick Young was one of many local Cortland graduates and started working at Rush-Henrietta in 1967. He had coached track at East Rochester for four years, and coached track for the Comets for a number of years, but then he asked Dave Armstrong to teach him lacrosse. He was the modified lacrosse coach for several years and then moved up to junior varsity from 1979-1986.

During his career at Rush-Henrietta Dick won a Section V championship with his 1982 lacrosse team. He also was a very successful swim coach and Boys Swimming Coordinator for many years. He retired from coaching in 1993 and was inducted into the Rochester Chapter Lacrosse Hall of Fame in 2004. When he left, Dan Gruschow moved up from the junior varsity to assist Jim Cox.

Both coaches had sons who were very successful lacrosse players. Jim’s boys, Tim and Kevin were stars at R-H and played for their their father. Dick’s boys played at Fairport. Rick, a midfielder, went on to play at Cortland where he earned All-American honors and later became the Head Coach. His other coaching stints included Princeton and Penn State. Steve was an All-American at Fairport and went on to play at Maryland.  Both Rick and Steve are long-time lacrosse officials. Their proud father says, “My two boys have given back to lacrosse, which I love, through officiating. They got a lot from playing and now they have given back.”

There are so many great players from Rush-Henrietta and picking some will leave out many, but among the standouts are:

Coach Cox fondly recounts that Mark and Kevin were his neighbors, “Mark lived on one side and Kevin lived on the other side”. 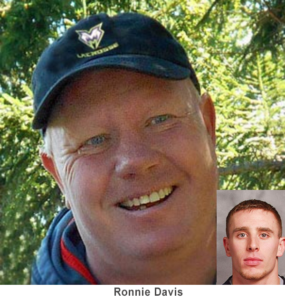