At the Executive Committee meeting in June of 1974, there were three significant decisions. The first was the addition of a woman to the committee that was, up to then, comprised of six men.  The President of the Women’s Athletic Council was added: “The progress of women in 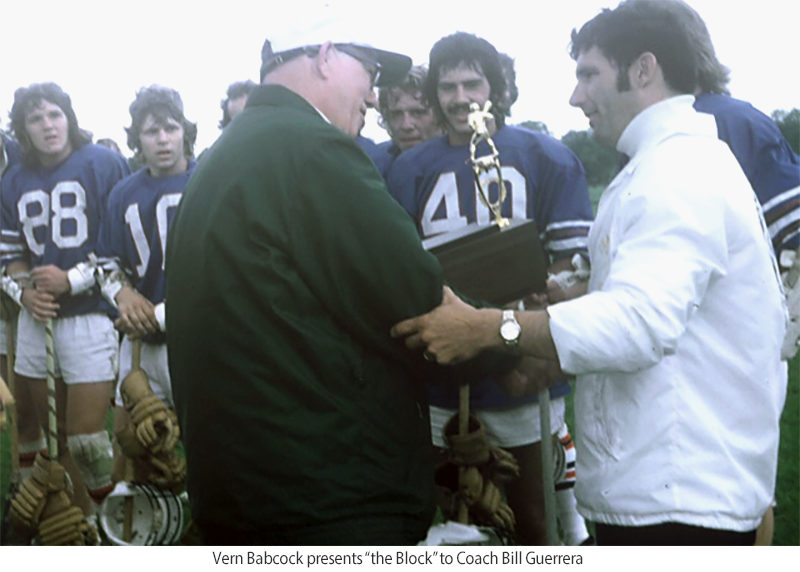 Section 5, in both competition and representation, is one of the most significant developments in the organization’s history,” said President Carl Palumbo. The second decision was, after some trials, to include “Catholic and private schools” in sectional tournaments. The third was the decision to approve lacrosse as a sectional sport in 1975.

The first “sectional meeting” took place in the winter of 1975. Vern Babcock chaired the meeting with Al Henry representing the Finger Lakes teams and Dave Moore for the Monroe County teams. Dave was filling in for Bill Guerrera who was the league chair, but unavailable for the meeting.

Over the last forty-six seasons there have only been four Sectional Coordinators, starting with, as expected, Irondequoit’s Vern Babcock, who served as “Chairman” in the 1975 and 1976.  Vern had been “running lacrosse” for years when the teams in the area played in the “Upstate League”. He started lacrosse at Irondequoit in the 1950’s and encouraged teams in the area to start programs. The first sectional tournament had eleven teams playing in 1975. Webster Thomas won the first tournament, beating Irondequoit 11-5. The next year, there were fourteen teams playing in the tournament and Irondequoit beat Corning East 8-7. In 1977, New York State ran their first state championship, but despite great efforts by Vern, the Section V Executive Committee, citing expense and precedent, refused to allow the teams to advance. Vern stepped down as Chairman in the summer of 1976, turning the job over to Bill Guerrera. Vern was later inducted into the first class of the Rochester Chapter of USA Lacrosse Hall of Fame in 1992.

Bill Guerrera, who had started the Webster “Ridgemen” program in 1964 and was the first Thomas coach when the teams split in 1975, had just won the first Section V championship. After twelve years coaching lacrosse in Webster, became their Athletic Director and turned the Thomas team over to Randy Garrett and the Schroeder team over to Dave Moore. 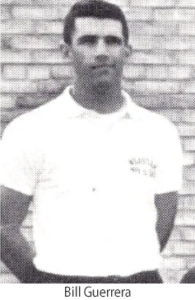 In part, to accommodate their first year in the NYS tournament, in 1978, the Section V tournament became closed to eight teams. Bill instituted a power-based seeding program based on the strength of opponents. The approach is still used today and has been very successful in predicting tournament winners.

An incredibly strong 18-3 Rush-Henrietta team, led by attackmen Kevin Ward, Hank Gaesser, and Mike Alves, had a demonstrative 13-2 win against Corning East. As the first Section V entry in the NYS tournament, the Comets lost to Long Island’s Farmingdale in the semifinals. 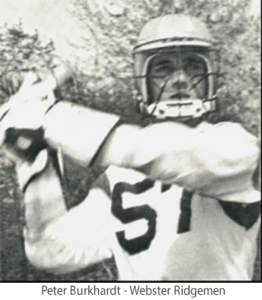 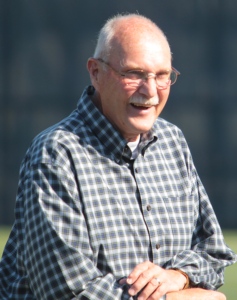 In 1988, Section V ran a single tournament again and Irondequoit was the 8-7 winner over Rush-Henrietta. Penn Yan was the only Class B team, so they advanced to the NYS tournament with the Indians.

Bill, who had served as Chairman for twelve years, was inducted into the Rochester Chapter Lacrosse Hall of Fame in 2004.

In 1989 Pete Burkhardt took over as chairman after assisting Bill for many years. He was a player on the original Ridgemen team that was coached by Guerrera in 1965. Pete coached in Webster at Thomas and for the combined Warriors team starting in 1980 through 1986. 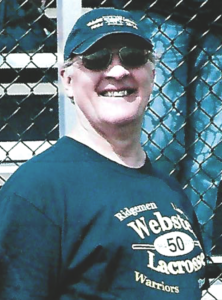 Pete was ably helped by his assistant chairman, Dave Moore, another Webster man. Dave coached the first Schroeder team in 1975 and continued through 1977. With a couple of years off while teaching in England, Dave served for twenty years plus another year helping Vern in 1975. Among his accomplishments were “fancy” tournament programs which were free to the tournament spectators. In the early years the programs cost fifty cents or a dollar. The Moore and Guerrera girls sold the programs at the sites. In later years the programs were free.

After the 1996 tournament Pete (with eight years) and Dave (with twenty years) stepped down. Pete Burkhardt was inducted into the Rochester Chapter Lacrosse Hall of Fame in 2003 and Dave Moore was inducted in 2006. 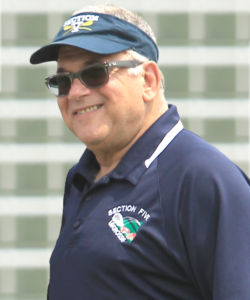 Mike Simon became the “Chairman” and Paul Wilson was named “Assistant Chairman” in 1997. Mike had coached at Waterloo (1992-1995) and Paul had started the program at Pittsford and coached from 1977-2003. Over the twenty-five seasons, Mike has seen the growth of lacrosse from seventeen to thirty-six team. [note: The term “Chairman” was eventually changed to “Coordinator”.]

In 2000 New York State reorganized their tournaments into three classes and Section V ran three tournaments with classes A and B closed at six teams and class C closed at four teams. Penfield, Canandaigua, and Penn Yan were the winners.

The year 2000 also saw the beginning of the SportsFive.NET website which promotes the players from Section V and at this point has more than 7,700 player profiles and more than 2900 stories.

Through the efforts of Mike and the Lacrosse Committee, The New York State Championships were held in Rochester in 2009.  The event was even more memorable with the Canandaigua 10-5 championship win over Niskayuna. The success of the tournament and the exposure to teams from all over the state helped to set up a return of the NYS championships in 2017, 2018, and 2019. Victor won state championships at home in 2017 and 2019. 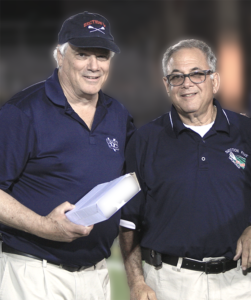 There were significant innovations starting in 2010, as the boys’ and girls’ coordinators started to meet with Section V liaison Jim Zumbo to plan their tournaments together, in an effort to make the tournaments more similar and to avoid playing-time conflicts as more families had both boys and girls playing high level lacrosse.